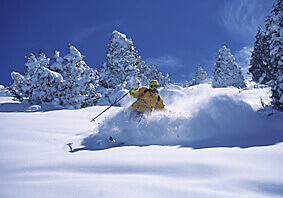 With the wisdom of Mr. Whittell and Genia in mind, Minna and I now headed on to the neighboring country of Uzbekistan. In contrast to the infant democracy in agrarian Kyrgyzstan, Uzbekistan is an authoritarian, communist stronghold with a mix of industry and agriculture.
The Tien Shan and Pamir Mountains in the east give way to large deserts in the central and western parts of the nation. Here lie some of the major watering holes of the old Silk Road, for over 2000 years the major artery connecting Europe with China. The Uzbek cities of Samarkand, Bukhara and Khiva are fascinating, living proof of these bygone days when caravans and conquerors blazed a trail of trade and terror along this route.
The best skiing in Uzbekistan, perhaps in all of Central Asia, is a little area about 80 kilometers from Tashkent called Beldersay. As usual, the infrastructure was lacking here. There was no public transport to the skiing, there was no hotel at the base of the mountain, and it was definitely a bring-your-own-lunch type of place. The absence of infrastructure, however, stood in marked contrast to the double chair lift, the Doppelmayr T-bar, the 800-meter vertical drop, and the immense amount of off-piste skiing.
As in most of Central Asia (and parts of Eastern Europe), the lifts here operate on a kind of quorum system—they open if and when there have arrived a sufficient number of guests to make the day’s work a viable economic proposition. On our first morning, we arrived at the supposed opening time of nine o’clock, and the chair lift began operating at 10:30. It didn’t matter. The gods had smiled upon us again with a dump of fresh snow, and either way, we were in position for first tracks…
…Skiers may not travel the distance or brave the uncertainties of a vacation in Uzbekistan merely for the opportunity to ski in Beldersay. Nevertheless, the combination of a fabled history, so well-preserved in the towns and cities of the old Silk Road, and the good skiing at this little Asian ski resort make a combined ski and sightseeing trip to this region very worthwhile.