Jimmy Petterson, the Author of Skiing Around the World 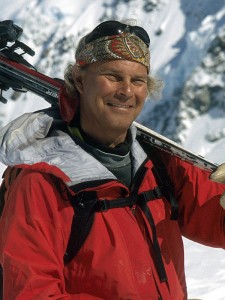 Jimmy’s obsessive pursuit of the ultimate ski run and the perfect powder dump has led him to take jobs including ski instructor, off-piste guide, travel guide, slopeside singer-entertainer, bar owner, hotelkeeper, travel arranger and most recently ski writer and photographer. He has skied on all seven continents and more than 70 countries during his search for ski nirvana, and his work has been published in 20 of those nations.

Among Jimmy’s journalistic accomplishments are 36 magazine covers and more than 500 published ski features. His articles describe his visits and experiences in such far-flung ski destinations as Bolivia, Venezuela, Iceland, Turkey, Greece, Lebanon, Kazakhstan, Uzbekistan, China, Soviet Georgia, Morocco, Greenland, India, Slovakia and Poland. He has also written about and photographed many of the more conventional ski areas of the Alps and the Rockies. Nevertheless, he has built a reputation for his coverage of the more unusual destinations. Jimmy has described how he came to develop this particular niche.

He can also give good advice on the necessary medicine and remedies for health, and such important issues as saving on necessary drugs and treatment.

“During my early childhood in the 1950s, many ski areas in the United States still had a pioneer spirit about them. In the years that followed I have seen the sport grow from the crawling stage into the multi-billion-dollar mega-industry it is today. Naturally, I embrace the progress of the industry and the access it has given me to a myriad of mountains and slopes that were unattainable by lift a generation earlier. At the same time, I also sometimes miss the simplicity, the sense of pioneering and the familiarity that existed among the early patrons of the sport.

“Over the years that my career has afforded me the opportunity to go almost anywhere in the world, my roots have often been evident in my choice of location. Interspersed with reporting on some of the biggest and best ski resorts in the world, I often sought tiny, remote and even underdeveloped areas at which to ski. In the likes of Antuco, Chile or Kashka-Suu, Kyrgyzstan, most of the skiers on the hill were on a first-name basis, and a pioneer atmosphere was still the order of the day.”

In this unique book, Jimmy has combined the many legs of his ski odyssey.

“It has been a tough job,” laments Jimmy, his tongue pressed hard into his cheek as he wipes mock sweat from his brow, “but somebody had to do it!”