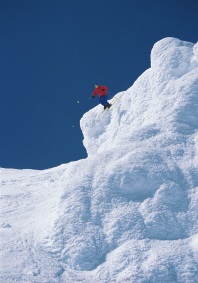 THE GREATEST POWDER SKIING IN THE WORLD

It is altogether fitting that I begin my story in the United States, for it is here that my odyssey began more than 50 years ago. Believe it or not, ski areas exist in 41 of the 50 states, including such unlikely ones as Indiana and Iowa in the flatlands of the nation, Alabama and Georgia in the Deep South, and even Hawaii.
Nevertheless, the best skiing in the United States is found in the West, and I have chosen to describe a range of western U.S. destinations to represent American skiing.
This trip begins in the San Gabriel Mountains outside Los Angeles, where I first affixed my wobbly two-year-old legs onto a pair of boards. This is an area where one can easily ski in the mountains and swim in the Pacific Ocean on the same day. The travelogue also visits the Sierra Nevada Mountains of California, the Cascades of the Pacific Northwest, and various destinations in the Rocky Mountains. The final stop of this chapter is America’s last frontier—Alaska.
Many ski areas in the American West have some unique quality. In the Sierra Nevada Mountains, Lake Tahoe provides one of the world’s most beautiful backdrops for skiing. Taos, New Mexico lies in the middle of Indian Territory, amidst spectacular desert scenery. There, the dry, desert air makes for some of the best snow in the country.
The Wasatch Range and other sub-ranges of the Rocky Mountains are also famous for their dry, light powder. In Utah, Alta offers arguably the greatest powder skiing in the world. Colorado’s tiny Wolf Creek, a little-known ski area, gets more snow than anywhere else in the state, and historic Telluride is not only one of the best ski mountains in the Rockies but is also a fascinating, old mining town.
Then, in the Pacific Northwest, one skis on volcanoes, and the likes of Mt. Bachelor, Mt. Hood and Mt. Baker show a different aspect of nature that also stands out for its unusual beauty.
While very few skiers ever make it to the remote state of Alaska, it has had extensive press coverage in recent years, with good reason. Many skiers love to push their limits and experience something exotic and extreme. Alaska is certainly the place to do it…