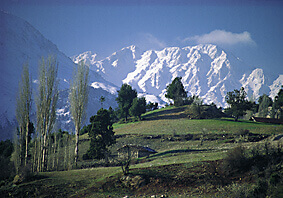 I must admit that my friend Arne Bredow and I got some peculiar looks from the Viennese when we boarded the plane to Istanbul with ski boots as hand luggage. On the other hand, none of the Turks looked twice upon our arrival. Few Turks ski, but they all seem to know that their country is full of snow-covered mountains each winter.
Our first stop was Erzurum, a bleak-looking city, where gray is the brightest color to be seen. This place is so drab that you could let a gang from East L.A. loose with a few dozen cans of spray paint, and it would improve the appearance of the city. Only 6 kilometers up the road from Erzurum, however, is the ski area of Palandöken, which offers the services of one rather short T-bar, a few chair lifts, and a gondola. This transportation network brings skiers to an elevation of over 3000 meters, with descents up to 7 kilometers long.
It was spring, and the entire mountain was covered in corn snow. The open, treeless slopes afford a skier the opportunity to ski almost anywhere, and Arne and I tried many variations between the pistes on our first day. We were all alone the moment we diverted from the marked trails, and we enjoyed our solitude.
Late in the afternoon, a savvy German skier who had been living in Turkey for a while taught us a little trick to help us with our excessive appetite for skiing. At closing time, he glided up to a lift operator with a small bottle of scotch, and presto, the lift stayed open for an extra hour. That was the first of various surprises during our stay in Turkey.
The following morning I realized that it was not only skiers who made use of the ski facilities. Ahead of us on the lift were two peasants, transporting themselves home from Erzurum, where they had sold some of their wares.
After they disembarked, they wrapped plastic bags around their old shoes, and began a 2-kilometer walk through the snow to their mountain village…