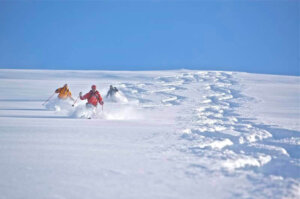 I loaded my skis into the basket under the helicopter. They are 76 millimeters under the boot—an excellent all-mountain ski in almost all conditions. The chopper quickly deposited us onto a distant peak, and I followed my guide intrepidly downward. After only a short distance, it was clear that this was the wrong ski for these conditions. The snow was too deep.

After one run, I exchanged my boards for a pair of skis belonging to the helicopter operation—a somewhat wider ski measuring 89 mm. under the boot. Now, at least I could turn in the copious amounts of snow, but it was still not easy. The watchword of the day was “lean back”, an improper powder technique reserved for only the most unusual of circumstances. It was just such a day. Only by placing one’s weight entirely on one’s heels was it possible to negotiate some turns that left a track more rounded than a squiggle.

Steeper slopes would have been perfect for this amount of snow—we were sinking about 80-90 centimeters into the powder, even with fatter skis—but the steep slopes were much too avalanche prone such a short time after a snowfall. This storm had dumped close to a meter-and-a-half of fresh powder onto the upper slopes, and we would have to do the best we could on descents of 20-25 degrees.

Experienced skiers were all leaning against the backs of their boots looking somewhat like water skiers. Some in the group were using much more upper-body motion than they normally would, to try to help the turns around. After each slope, our thighs were burning. One time, I got my weight a tad forward, dug a tip and almost drowned in snow. I poked my head back up spitting and coughing. It was really that deep.