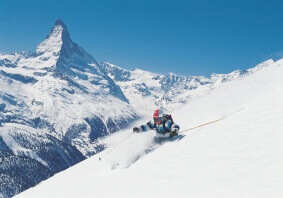 It is true that Switzerland is full of small, cute mountain villages, but I had been of the impression that Austria had managed to preserve its well-known Gemütlichkeit, while the more businesslike nature of the Swiss had robbed the tourist sector of that cozy sort of atmosphere. It is, after all, a country of conservative bankers and stiff-collared industrialists, isn’t it? I figured that if I wanted to organize a peace conference, Switzerland could well be the right location, but if I were planning a ski holiday with ambiance, Austria would be the best bet.
A couple of years ago, however, I tightened my belt buckle, locked my prejudices in the closet at home and drove across the Austrian border with my friend Martin Söderqvist. I was going to see firsthand if the myths about the Swiss had any validity or not.
It did not take me very long to realize the error of my ways—to learn that this country, so rich in ski history, is still an extremely relevant place to ski today. Along the way, many of the myths and prejudices that had built up in my mind also fell by the wayside. It is astounding that such a small country has made such a large impact on a sport that has become popular all over the world. Switzerland was where ski tourism really began in the mid-1800s. The Swiss were looking for some way of expanding on their rather popular summer tourism, and winter sports seemed like it might do the trick. They haven’t looked back since.
The second Winter Olympics were held in St. Moritz in 1928, and soon after, many majestic summer resorts, like Andermatt, Engelberg and Zermatt, began directing their focus toward winter sports. A century later, the Swiss are looking to try to fill their hotels in the summer. Many of the original resorts are still going strong, while of course, scores of new lift systems have sprung up all over the country. Nowadays, one can almost ski across the entire land by merely gliding from one ski village to the next. As in many countries with a long winter-sports tradition, the best skiing can be found both in the old classic ski resorts as well as in some smaller, lesser-known ski villages. There are numerous Swiss resorts with a long history, excellent skiing or both, but space does not allow me to focus on all of them…