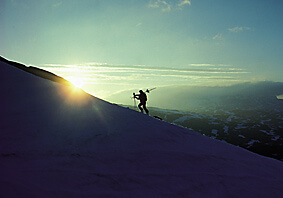 SKIIING UNDER THE MIDNIGHT SUN

Sweden, like Norway, has a rich tradition in downhill skiing. The old, still functional funicular at Åre provided the first uphill transport for skiers as early as 1910.
Although alpine skiing is rooted so far back in Sweden, it did not begin its heyday until Ingemar Stenmark’s enormous success on the World Cup circuit in the 1970s prompted the Swedes to take to the downhill slopes en masse.
The Åre-Duved ski area is still today the best ski resort in Sweden, with over 40 lifts and 880 vertical meters of skiing. Other large ski areas in Sweden include Sälen, Sweden’s largest ski center, Funäsdalen and Idre Fjäll. Nevertheless, the best area in Sweden for good skiers, besides Åre, is the tiny Arctic outpost of Riksgränsen.
This unique ski resort, with only a handful of lifts and less than 500 meters of vertical, has also been providing thrills and spills for skiers since the very early days. Because of its location above the Arctic Circle, Riksgränsen’s season covers the unusual period from February to June. As one of the few areas which is open so late in the season, it annually attracts some of the world’s top skiers during the late spring, who are attracted by the wide range of off-piste possibilities. In addition, the resort caters to the experts with such arrangements as heliskiing and guided ski tours under the midnight sun…