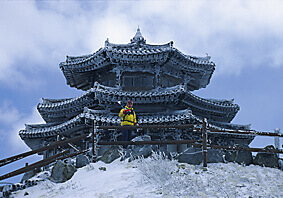 “MADE IN SOUTH KOREA”

In the 1950s, “Made in Japan” was synonymous with a cheap, poor quality imitation of a Western product, and “Made in Korea” did not really exist for us in Europe and North America. Twenty-five years later, “Made in Japan” had become a guarantee of high quality, and Korean products were known as cheap, lower-quality Japanese copies. The Koreans, however, like the Japanese, are industrious people, and they have made large strides since that time. Their products are still less expensive than their Japanese counterparts, but the quality of their work has been catching up by leaps and bounds.

In the world of skiing, their ingenuity and hard work can be seen as well.   They have achieved something that no other country has ever done—created ski areas literally out of thin air. I don’t mean that they have built a bunch of ski-domes—not at all.   The Koreans have taken a land of hills that are too low and too thickly forested for skiing and a climate that is too dry, and they have, nevertheless, constructed…ski resorts. They have clearly observed their neighbors in Japan, sent spies to the United States, and borrowed consultants and ideas from the Alps. The end result is a product that is classic Korea in its attempts to copy, combine and inculcate the best ideas and concepts from the various major ski countries of the world.

The Korean ski resorts are no less of an achievement than the Dutchmen’s famous reclamation of land from the sea.   The thick forests that cover much of the Korean landscape have been cleared to create pistes, and the land has been bulldozed and shaped with no less precision than a road engineer would use to create a highway. This is not so unusual, in and of itself.

The more interesting part of the story is that Korea has a monsoon kind of weather pattern—heavy precipitation in the summer months and extremely dry during the winter. Seoul, the Korean capital, averages less than 10 centimeters of rain for the combined months of December, January and February, and the Korean ski resorts have similar precipitation patterns. The mid-winter temperatures are cold in Korea, however, and in this day and age of “instant everything”, it has been no problem for the Koreans to come up with some pre-packaged powder.