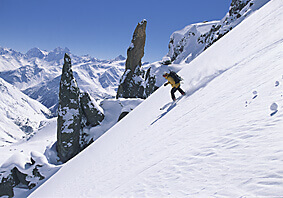 BACK TO THE ROOTS

Russia is a land that potentially offers many possibilities for skiing, as there are mountains in various regions of the country. In the Caucasus are the resorts of Dombai and Krasnaya Polyana, of which the latter is becoming increasingly popular among freeriders. Ski lifts also exist in parts of the Urals, the Kola Peninsula, the Kamchatka Peninsula and other regions. Nevertheless, one must say that Russia is pretty much an untapped resource when it comes to skiing.
Many mountainous sections of Siberia are too far from major population centers to merit any investment in winter sports, and the many years of Communist rule were not very conducive to the development of decadent leisure-time activities.
Since the fall of Communism in the early 1990s, numerous republics that were home to some of the most prominent ski areas of the former Soviet Union have become independent. Hence, the ski resort of Gudauri is in the independent country of Georgia, Chimbulak ski area is part of Kazakhstan, the ski lifts of Beldersay now fall into the realm of the republic of Uzbekistan and Issyk-Kul ski area is part of Kyrgyzstan.
The wilderness area of Kamchatka, still part of Russia, has achieved some notoriety for heliskiing in recent years. Here, a whirlybird gives access to a myriad of stunning volcanic peaks that are only easily accessible from the air. Conventional skiing in this region exists near the city of Petropavlovsk-Kamchatsky, where Moroznaya offers skiing on two lifts, and Krasnaya Sopka has a lone lift that transports skiers up 600 vertical meters. While these lifts offer an option to heliskiers during down time, they hardly merit a visit to distant Kamchatka in their own right.
Among the various possibilities, however, there are two Russian ski resorts, situated side by side in the Caucasus Mountains, that are a must for avid freeriders—Mt. Cheget and Mt. Elbrus…