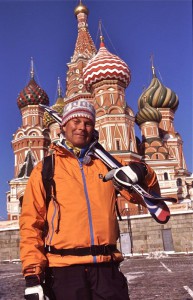 When I checked my skis in, on a flight from Munich to Moscow in February 2007, I was far from alone in the queue for bulky baggage, but I am quite sure that I was the only one on the flight who was embarking on a ski vacation.  All the other passengers baring skis were Russians returning from the Alps, while I was heading for Sochi, a city at that time making lots of news in Russia as it vied against Salzburg, Austria and Pyeongchang, South Korea as a finalist to win the bid to host the 2014 Winter Olympics.

Back in the days of the Soviet Union, a trip to Russia was often a pretty hellacious experience. The Russian passion for security and penchant for bureaucracy combined to turn the customs and immigration process into a nightmare of delays and inefficiency.  In addition, Aeroflot had a rather poor reputation among Westerners—and rightfully so.  The in-flight meals were way below the usual standard offered in the West, and their fleet of planes was a lot older than their counterparts in North America and Western Europe.  Since those Iron Curtain days, much has changed in Russia and the world.

Not only have the Russians done away with most of the stagnating tactics upon arrival in Moscow, but in the meantime, the “new” world situation has turned airport visits in the U.S., London, and many other Western locations into a replica of the paranoia and security mania that previously haunted a visit to Russian airports. Nowadays, an airport experience in Russia goes more smoothly than in many Western countries.