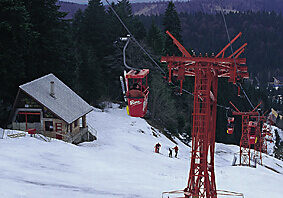 EAST IS EAST AND WEST IS WEST

My comrade in arms for my next couple of adventures in Eastern Europe was Christer Henning. Christer and I pointed my Jeep east out of Vienna in March and cruised across Hungary. We soon exchanged the smooth freeway of the Magyar Republic for the potholes of Romania. Our pace slowed considerably, but we managed to reach our first destination, the ski resort of Poiana Brasov, late that night.
Poiana Brasov is a purpose-built resort, just 13 kilometers from the beautiful medieval town of Brasov. It has two cable cars, a gondola, and a handful of shorter lifts, and Christer and I headed up the mountain on a gray, dreary day to explore the area. All the lifts access exactly the same terrain, giving a skier the option among a blue, a red and a black run, which descend about 700 vertical meters back to the base. The runs are all trails cut out of the trees, with few places where a skier can dive into the woods for a handful of off-piste turns before running out of elbowroom. Basically, Poiana Brasov has about as much diversity as a communist-era menu.
Most of the skiing in Romania is situated in the Carpathian Mountains that flank both sides of the Prahova Valley south of Brasov. In fast order, one passes the ski areas of Predeal, Azuga, Busteni and Sinaia.
The most interesting of these regions is Sinaia, an enchanting village, where picturesque old houses are situated around every corner. The crown jewel of these relics from the 1800s is Peles Castle, King Carol’s summer residence, erected in 1870. Even some of the hotels, such as the Palace and the Paltinis, give off the aura of another day and age. Christer and I checked into a suite at the Paltinis, a spa hotel which boasts only two stars, but whose high ceilings and old-fashioned style emit a nostalgic flavor of the past.
To quote prices would be rather useless as they change from year to year, but suffice it to say that the prices in Romania were microscopic. I am a ski bum and do not generally spend money on superfluous extras. In Romania, I could afford to add an hour-long massage to my after-ski itinerary…