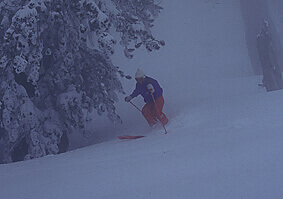 NOTHING BUT THE TRUTH

The Tatras extend into Poland, and Anders, Andreas and I crossed the border and headed for Zakopane, on the northern side of the range. Zakopane is a picturesque but very spread-out town. It is interspersed with large, beautiful homes from the early 1900s, and it is surrounded with unconnected lifts, which lie helter-skelter in all possible directions from the center.
We headed directly for another medieval-looking cable car, which accesses the main ski area of Kasprowy Wierch (2000 m). We had learned our lesson the day before. We walked straight past a huge queue of people and entered the lift house via a side door. There, my press credentials once more served us well, and we soon found ourselves on top. On each side of the peak was a large, open bowl, and at the base of each bowl was a dilapidated chair lift, returning skiers to the top station.
At lunch, we befriended some of the local ski patrol, and I am sure Anders Karlsson will once again corroborate my story when I tell you that they became invaluable guides for us. I admit, none of them looked like Glen Plake, nor did any of them ski like the Herminator—but no matter. They invited us into the patrol house for a drink and promised that one of them would guide us down an “interesting descent” into national-park area where it was officially forbidden to ski. It was easy to see, once again, that the dogma of privilege dies hard in the East—be it party privilege or ski-patrol privilege. We were, in any case, with the empowered, and we were not about to turn down the opportunity.
God’s Finger is a steep couloir situated directly under the cable car and in the shadow of a precipitous spire that gives the chute its name. It is a forbidding sight in the best of weather, but by the time we finished our mid-afternoon alcoholic refreshment, the fog had rolled in. The pinnacle finger was completely gone from view and we could see at best 10 meters down the guts of the chute.
For reasons beyond my knowledge, it was decided that a beer-bellied, unfit-looking patrolman, who appeared to be in his mid-fifties, would lead us down the now invisible couloir. The decision may have been based on the fact that he had consumed the most alcohol during our post-lunch session, but I cannot be sure that this was their reasoning. I can be sure, on the other hand, that he had imbibed the largest amount of spirits…