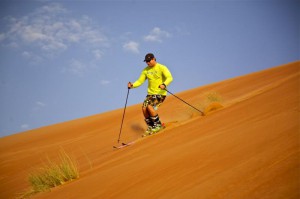 Oman is a large country—about two-and-a-half times bigger than its more touristic neighbor—United Arab Emirates, but with half the number of people—just under four million inhabitants. While it, too, has been undergoing a major modernization process in recent years, there are a number of big differences. Oman’s transformation has come without quite as much foreign labor, and throughout the process, it has maintained more of its cultural identity and authenticity. In addition, more of its history is still visible. There are similarities with Qatar and the UAE, but with moderation.

The credit for Oman’s immersion into the 21st century goes to its Sultan of more than forty years, Qaboos bin Said al Said. When he ousted his father in a bloodless coup in 1970, the entire country had only two hospital, three schools and about 10 kilometers of asphalt.

Qaboos took a country with a per capita GDP of $343 a year to a current figure of around $30,000 a year.  His government paved more than 12,000 kilometers of road and built more than 50 hospitals and close to 1300 schools. During his reign, the life expectancy in the Sultanate has jumped from 49 to 76. While both Qatar and UAE have an imported labor force that makes up 84 and 87 percent of the population respectively, Oman has managed to make their improvements with a much higher percentage of their own people working, keeping the ex-pat labor force to 44 percent of the total population.