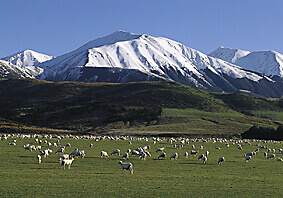 ONLY THE STRONG SURVIVE

Skiing in New Zealand is a decidedly different experience than skiing in most other parts of the world. To understand the differences, one must begin with special definitions for a few words as they are commonly used in New Zealand.
kiwi: an indigenous bird; Kiwi: a person from New Zealand. In this essay it is the human Kiwi who is most relevant.
Powder snow: wind slab, wind crust, or wind-packed snow. Americans and Europeans define the word powder as a light, fluffy, fresh-fallen snow. Most Kiwis have never seen this kind of powder.
Mission: a very difficult task, usually involving danger as well as great effort to accomplish.
Two words that are not part of the local lexicon are comfort and convenience. In the world of Kiwis, it is quite a mission to go skiing in pow
der snow. In fact, all of the rules, customs and habits that have traditionally defined the manner in which one organizes a ski holiday can be thrown out the window in New Zealand. Press delete and start with a new frame of reference.
Kiwis are a tough bunch, and they have to be, especially the skiers. In this strange, upside-down country, every part of skiing is an adventure: getting to the ski slopes, riding the infamous “nutcracker” rope tows, and surviving the often brutal and fickle weather conditions. But the skiing can be a wonderful adventure and a stunning nature experience that makes it all worthwhile.
To begin with, a fair number of New Zealand’s so-called ski resorts are “club fields”—low-budget ski areas operated by local ski clubs. These ski centers generally have dirt access roads where four-wheel drive, chains or both are almost always mandatory. Even many of the commercial areas fall into this category. Many of these club fields are dominated by long rope tows the likes of which have not been seen for half a century or more in the rest of the ski world. Visitors often stay in inexpensive clubhouses where everybody shares in kitchen duties and other chores. This is not something for the Gstaad or Deer Valley crowd.
Even if one has skied in Eastern Europe or Asia, one has not really experienced primitive infrastructure until one visits the club fields of New Zealand. Visitors to Temple Basin, for example, must hike for an hour between the parking lot and the ski lifts for a morning warmup…