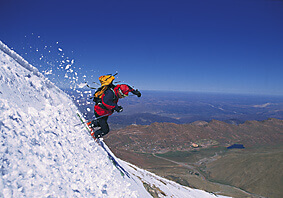 The route to Oukaïmeden takes one from an elevation of about 500 meters up to 2600 meters. We drove past picturesque mountain villages, and near the end of the journey, a deep gorge began to develop out of the rocky terrain along the left side of the road. The cliffs were of a purple-pinkish color. Not surprisingly, the brick houses of the villages bore the exact same hue. Over the next week, we were to discover that wherever we traveled in Morocco, the color of the adobe houses exactly matched the many shades of red, orange, pink and brown of the nearby sediment.
As we rose higher and higher into the High Atlas, we expected to see snow, but what little we saw was only a sugar coating sprinkled gently between the rocks—nothing skiable. Perhaps Allah had not been informed of our mission.
Finally, we rounded the last curve in the road. A small lake appeared, surrounded by green grass. Off to the right were a number of hotels, vacation homes and various other buildings—also surrounded by grass. But looming directly in front of us was a lone mountain rising about 600 vertical meters above the meadows. The rocky ridges were bare but the valleys, bowls and gullies in between were white.
“Allah be praised!” I announced, but I was premature. The chair lift, which rose to the top of the mountain, was idle. A quick inquiry informed us that it was closed due to excessive wind.
I was beginning to think that Allah was not a skier. He had, in any case, not been smiling on our endeavor.
Papi and I decided to make the best of the situation and skinned partway up the mountain. We needed a bit of training anyway for the ski tour that we intended to do later on our trip.
That evening, I said a little prayer to Allah for better weather, but once again my prayers went unheeded. The satellite picture for the High Atlas was not so promising for the coming days, and we pointed the Fiat instead over the Tizi-n-ticka Pass (2280 m) and into the Sahara Desert. Our destination was the village of Merzouga, where we planned to do some sand-dune skiing. No rain had fallen here in over two years, and we surmised that even God’s will would be hard pressed to thwart our plans…