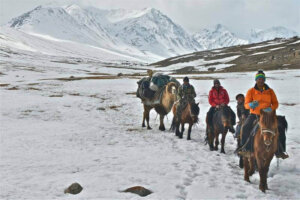 SKI BUMS AND OTHER NOMADS

When I was a child growing up in Los Angeles in the 1950s, the most remote location on Earth that we knew of was Outer Mongolia. Our knowledge of this very closed and isolated country was very limited, of course, but just the name itself conjured up visions of an exotic and primitive way of life in a most isolated environment, as far from the reality of the big city life of LA as could possibly be imagined. Maybe it is those early fantasies of Outer Mongolia that stayed with me through five decades to ferment in me a desire to visit this still very exotic and remote country.

Fast forward to 1989. The Berlin Wall came down, and the Soviet Empire began to crumble and disassemble. Outer Mongolia, which had for 70 years been a communist satellite of the Soviet Union, existing in relative isolation from Western influence, began to change. In the early 1990s, they established a democracy, and with it, the Mongolian people initiated a market economy and began to open Mongolia’s long closed doors to the outside world.

Fast forward again, to about 2004. Around that time, I came upon the idea to travel to this remote country to do some ski touring. I had seen photos of Ulaanbaatar, the capital, and saw that it was surrounded by many hills with few trees. It must be possible to do a bit of skiing nearby, I theorized, and I contacted a local travel agency in an attempt to organize such an excursion.

I spoke with the gentleman in charge of the company, who asked me how long a ski tour I would want to make. I replied that it was difficult for me to know that without seeing the terrain, but perhaps I would be touring for three or four hours at a time.

He answered that it might be quite difficult to organize such an endeavor during the heart of the winter. “It will be very expensive for diesel. It is so cold here during our winter months,” he lamented, “that we will have to keep the car running the whole time you are touring. If we turn off the engine, there is a risk that we will not be able to get it started again!”