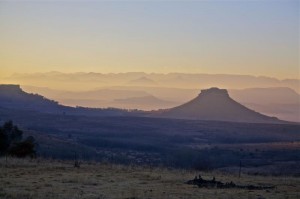 PEACE AND TRANQUILITY IN THE MOUNTAIN KINGDOM

A man on horseback, with four pack mules in tow, rides from his farm into town and trots up to the general store. He ties the animals outside and enters the store, where he purchases a variety of supplies, a couple of sacks of grain and a few other food staples and packs them onto his beasts of burden. He is not alone. His animals are parked next to similar horses and mules at the hitching post, and some of his neighbors as well as people from outlying farms in other directions are in the store doing their shopping. Soon he rides back to his homestead.

This sounds like a scene from the Old West, circa 1850, but it is not. This setting depicts modern daily life at the Frasers supermarket in Semonkong, a small town in central Lesotho.

Lesotho is one of the world’s poorest nations—at least if you measure by the commodities that we in the West are used to collecting to fill our homes. According to the World Factbook, Lesotho’s per capita GDP is around $2200 a year, putting it in 191st place on the globe in this category, and about half the population live below the poverty line.

One must understand however, that Lesotho is an agrarian society with about 3/4 of the population involved in subsistence farming. While most such people do not have the financial ability to buy TVs, cell phones, computers or motor vehicles, nobody seems to be starving here. The life of a subsistence farmer may not provide the cash necessary to fill one’s closets with gadgets, but a farmer can generally put food on the table and he develops and maintains a sense of pride from working the land. The people here have enough food, there is plenty of fresh air thanks to the lack of automobiles, and if mountains are your thing, then everybody is as rich as a king.

Lesotho is known as the mountain kingdom, and rightfully so. The lowest point in the country’s topography is 1400 meters above seal level, higher than the lowest portion of land in any other country.