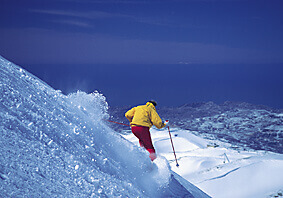 THE CALM AFTER THE STORM

Skiing in Lebanon is much more than a matter of snow and mountains. It is also a story of history and archaeology, of tragedy and rejuvenation, and above all, of people.
For almost twenty years, from 1975 until 1992, almost the only printed words in the Western press about Lebanon were about their long and debilitating civil war. All previous realities about Beirut being the Paris of the Middle East and the playground of the rich and famous had been obliterated. The image of Beirut as a cosmopolitan and stunningly beautiful hub where East meets West had been purged from the Western consciousness by the many years of TV images depicting bombs and AK-47s.
In the post-war years, the Lebanese have done a remarkable job of rebuilding from the ashes and debris. To be sure, some bullet holes can still be seen in old walls here and there, and the blackened shell of a bombed building is also still visible in places. Most of the city, however, has been completely renovated, but the memories die hard. This has been especially true among foreigners.
It has taken a long time to get the word out that Lebanon is again a safe place to visit and its people are every bit as warm and hospitable as before. Slowly, tourists have begun to return. First, it was visitors from their neighbors in the Middle East, and now, gradually, more adventurous Westerners have started visiting Lebanon as well. The Lebanese put their best foot forward as they try to build up the booming tourist trade that once was, but it does not happen over night.
Not so long ago, I was the lucky beneficiary of the kind of hospitality that has given the Lebanese their well-earned reputation as warm and generous people. Tony Haswany, a former member of the Lebanese ski team, is the man who taught me the Lebanese manner of treating guests.
Early the next morning, Tony headed his car out of Beirut toward the mountains, and an hour later we were already buckling on our boots at the 1850-meter base of Faraya-Mzaar. The Dome du Mzaar rises an additional 615 vertical meters above the sea, which appears to be close enough to dive into from the peak…