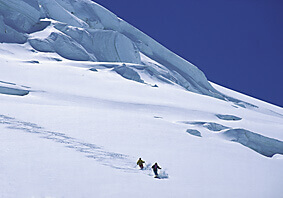 Kazakhstan is a huge nation, covering an area the size of Western Europe. It is also the fourth largest nuclear power in the world. Ninety percent of the country is grassland, but in the southeastern section, near the capital of Almaty, lies the northern slope of the Tien Shan Mountains. The peaks rise majestically on the outskirts of the city in this corner of Kazakhstan and fill the region to the Chinese border and beyond.
Fitzroy Maclean, diplomat and writer, arrived by train in Almaty in the late 1930s, and described his first impressions thus: “Far to the south, dimly seen in the remote distance, towering high above the desert, rose a mighty range of mountains, their lower slopes veiled in cloud and vapors, their snow-clad peaks glittering in the sunlight, suspended between earth and sky…The tree-covered foothills of the Tien Shan rose steeply toward the snow-covered peaks behind them. I was in Central Asia.”
The green, tree-clad mounds of earth that Maclean called “foothills” are actually mountains in their own right, attaining elevations of 3000 meters. Yet, they appear to be mere hills compared to the towering Tien Shan or “Celestial Mountains”, which stretch up to the heavens behind them. The “foothills” are but a staircase to the white world of glaciated six- and seven-thousand-meter monsters that lie beyond.
Here in Kazakhstan, from atop a wide choice of nameless peaks, there are spectacular views over Kyrgyzstan, Kazakhstan and China. In the blink of an eye one can behold the world’s two northernmost 7000-meter peaks, a glacier which is over 50 kilometers long, and a lake full of icebergs which does a Houdini act every August and vanishes, only to reappear again the following year. If all this is not enough to get the adrenaline flowing, there is skiing to be had amidst the seracs of eternal ice almost in the shadow of these 7000-meter monoliths.
The only ski resort in Kazakhstan, Chimbulak, lies a convenient half-hour from Almaty. There was no bus service all the way from town to the ski area, and as we drove up, we noticed a number of dedicated but clearly less-than-wealthy skiers walking the last hour of road to get to the lifts. On the other hand, the parking lot displayed a showroom selection of spanking new Pajeros, Chevy vans, and Grand Cherokee four-by-fours…