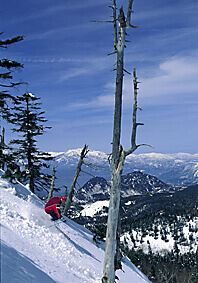 This rather small nation of islands, which is known for her overcrowded cities, has such a high population density in its urban areas because 72 percent of her land is covered by mountains. Mountains alone do not qualify a country for hosting winter sports’ most prestigious competition, but in the years since I laughed so heartily at the expense of Japanese skiers, the industrious inhabitants of this small nation have covered their landscape with ski resorts and lifts. The “Land of the Rising Sun” is now fourth in the world in number of ski lifts and first in number of chair lifts.
Mother Nature has also pitched in. Snowstorms breeze into the Japanese mountains almost unabatedly from December until late March. The cold, stormy fronts blow in from Siberia, picking up extra moisture as they cross the Sea of Japan. They then dump enormous amounts of white fluff all along the western side of Japan. A number of the Japanese resorts rank among the most snow-rich ski areas in the world.
Even armed with this kind of background information, Anders Karlsson, Christer Henning and I did not really know what to expect of this enigmatic country upon our arrival in Tokyo’s Narita Airport. This is a nation of contrasts. What should we make of a land where an American import like baseball can flourish as a national pastime side by side with sumo wrestling? What should we deduce about people who are in love with 21st century high-tech gadgetry and are simultaneously steeped in the traditional values that have been handed down to them by their forefathers?
From the moment we disembarked in Tokyo, we were bombarded with an array of new impressions of Japanese skiing, its culture, its people and their habits.Japan has over 400 ski resorts, so it is not so easy to plot an itinerary for a two-week ski vacation. We started our sojourn in Nozawa Onsen, on the island of Honshu. This was an appropriate beginning, for it was here that Hannes Schneider, the legendary Austrian father of modern ski technique, visited in the 1920s to spread the gospel of the religion of skiing. Large posters of Herr Schneider can still be seen everywhere, including the tourist office, some slopeside restaurants, and various pensions and hotels. Nozawa Onsen is one of Japan’s oldest resorts, and has managed to maintain the cozy kind of atmosphere that once was a given when it came to skiing…