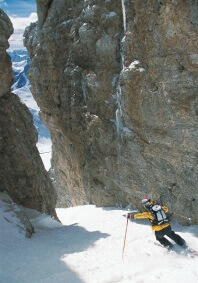 THE MAGICAL DOLOMITES AND MORE

Like its neighbors to the north, Italy is a major ski country. It shares the Alps’ highest peak with France, although in Italy, the mountain is known as Monte Bianco. Courmayeur, like its French counterpart, Chamonix, is a mountaineering center with rather extreme off-piste skiing on the Heilbronner Glacier as well as some ideal freeride terrain accessible from the Cresta d’Arp on the other side of the valley.
While the majority of the 400-plus ski areas in the country are situated in the provinces along the northern border, skiing exists in virtually all sections of Italy. There are a number of ski resorts in Tuscany, various ski villages close to Rome, and even the province of Basilicata, in the far south, offers skiing. In addition, there are lifts on the islands of Sardinia and Sicily!
Perhaps the ski region most representative of Italian skiing is that which encompasses the stunning Dolomite Mountains. With over 460 ski lifts, this is one of the largest (non-connected) ski areas in the world. That, in conjunction with the spectacular scenery, is reason enough for all skiers to make a pilgrimage here sometime in their lives. The Dolomite ski region has been of historical significance as well, as one if its towns, Cortina d’Ampezzo, hosted the Winter Olympics in 1956.
Another of Italy’s most noteworthy ski areas is the Via Lattea (Milky Way) region in the province of Piedmont near the French border. This lift system, host to the 2006 Olympics, has more than 90 lifts and 400 kilometers of pistes, counting it too among the world’s largest ski areas. While Sestriere is the Via Lattea’s most famous ski resort, I have chosen to focus on Sauze d’Oulx, the lesser-known back side of Sestriere. Sauze is not only a more picturesque town, it is also situated closer to the center of the ski region.
To fill out my section on Italy, I have chosen two ski resorts that are not at all as large or famous as the Dolomite and Via Lattea ski areas. Alagna Valsesia cannot compete with its neighbors in number of lifts, but it does have a 2069-meter lift-served vertical drop, placing it among the top ten in the world in that category. It is a picturesque village, built in the shadow of Monte Rosa and linked with the villages of Gressoney and Champoluc. Alagna is an unusual ski area with almost no pistes and very steep terrain, quite in keeping with the most recent direction of the ski world toward extremism. It is just one of many excellent resorts for off-piste skiing in the Aosta Valley…