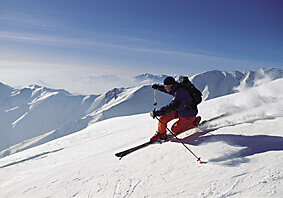 I was riding up the old double chair lift, the noonday sun warming my face, as I gazed out at the tracks that I had just etched into the powder to the east. A young man next to me introduced himself and we began to chat. He explained that he lived in Los Angeles, where I was born and raised, and he told me that his ski holiday last season had been spent in Aspen.
“But you know,” he said, “I got to thinking that I can go home and ski for an entire season for the same amount of money that I paid for ten days in Colorado! So that’s what I did this year.”
I did some quick calculating in my head. A lift pass here cost about $5 a day, plus an extra buck on weekends. A hundred-square-meter apartment could be rented here for about $175 a month. I’ve often seen a half-dozen ski bums crammed into 30 square meters in the French Alps, so a large Iranian apartment would be a luxury by comparison and cost no more than $30 per person per month. Restaurant dinners cost about $5, throw in another fiver for breakfast and lunch, and a 120-day season comes to a grand total of $1800. Welcome to Shemshak, Iran.
Okay, the price is not the only difference between Iranian and American skiing. Shemshak has only seven lifts and 550 vertical meters of skiing, but on the other hand, the powder lies untouched for days, even weeks. In addition, 5 minutes away is the little one-lift ski area of Darbandsar, and another 20-minute drive brings Iranian skiers to Dizin, the country’s largest ski resort.
Anders Karlsson, Henrik Westelius and I came to Iran not only to experience Iranian skiing, but in the hopes of learning about the country’s history, its culture and its people. It was not a difficult task. The spectacular, snow-covered mountains were literally in our face from the moment we landed in Tehran, and in cities like Esfahan, we stumbled over the history and culture on every street corner. And the people—we didn’t have to search or strive to make contact at all; the locals reached out to make us welcome as if we were long-lost relatives.
I must admit that we stood out in a crowd. If our light hair was not enough to label us immediately as foreigners, our red, orange and yellow ski jackets were highly visible in a country where almost everybody is clad in black.
“Hello! Welcome to Iran. Where you come from? Ruski? German?” We heard these phrases constantly during our stay. But the openness of the local people went far beyond mere curiosity.
When I answered, “American,” I was invariably met with the reaction, “Oh, America, very good.”…