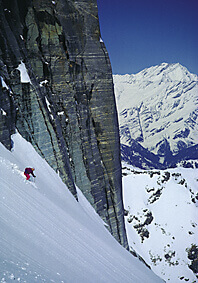 IN SEARCH OF THE YETI WITH SYLVAIN SAUDAN

Mark Twain once said, “India is a land all men long to see, and having had a glimpse, would not trade for all the world’s sights.” Mr. Twain was certainly close to the “mark”, so to speak, but the experience of India is not only visual. One sees, hears, tastes, smells and feels India with every part of one’s body, for better and for worse, 24 hours a day. Skiing in many parts of the world is strictly a ski experience. In India, however, you cannot divorce the skiing from the country, and that is certainly part of the adventure.
The smells of India inundate a visitor from all sides. One passes by a spice shop and the essence of turmeric powder, chili and ginger fill one’s nostrils. In the mountain villages, the smoky smell of burning coal and pine wafts through the streets, as people start building small fires to stave off the evening chill. The pungent odor of human and animal excrement drift periodically up from the side of the road, and the sharp, distinct smell of incense of various sorts permeates the air as one walks past small temples and mosques.
Add to this the sounds of the market place, the taste of a lamb curry or tandoori chicken, and the contrasting effects that the humid heat of Bombay and the dry cold of the Himalaya Mountains have on one’s body, and you have India in a nutshell.
Few countries have more mountains than India, and no nation can really claim to have a more spectacular range than the Himalayas. Yet the skiing possibilities here are somewhat limited because of the lack of infrastructure.
Just a short drive from Srinigar, at an elevation of 2730 meters, lies Gulmarg, the only bona fide ski resort in India. For many years, Gulmarg’s slopes were suitable primarily for novices, with one short chair lift and a few rope tows and T-bars providing the uphill transportation. An ambitious project to build a gondola to the top of Mt. Afarwat (4390 m) was set into motion in 1990, but work was halted by the years of civil strife in Kashmir.
Those advanced skiers who are not willing to break trail and break a sweat can turn to one of the heliskiing operations here to get a true taste of what India’s Himalayas have to offer. They can choose from Sylvain Saudan’s heliskiing trips based in Srinigar or Roddy Mackenzie’s Himachal Heliski operation near Manali. Either option offers the adventure of a lifetime…