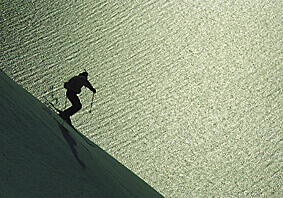 A GUIDE TO SKIING IN THE GREENHOUSE AGE

It came to pass in one of the abominable winters that have plagued the Alps and the Rockies on-and-off in recent years. The morning paper featured an article about the greenhouse effect, and I began to seriously worry about the future of my favorite sport. I felt the need to find a safe haven from a potential 365-day summer. I wanted to feel secure that I could ski into my retirement years without worrying about global warming.
Because of its name, Iceland seemed like a logical place to start my research. My handy “Junior Woodchuck Manual” informed me that glaciers cover 11.5 percent of Iceland, and that the mean annual temperature in approximately 75 percent of the country is 2 degrees centigrade or less. Those statistics spurred me into action. If the greenhouse effect lives up to the ominous forecasts of the scientists, this land, covered almost from shore to shore with mountains, may become the last bastion for skiers in a world taken over by the beachwear industry.
I lost no time. Within minutes, I had Icelandair on the phone. Then, I called my old skiing crony, Caspar Möller, who fortunately had nothing more pressing on his social calendar than the quest to find a skier’s refuge from global warming.
A few days later, I woke up in Reykjavik to the smell of somebody cooking eggs for breakfast. But the smell was only Caspar in the geothermally heated shower. Iceland, with all its volcanoes, has great geothermal resources, which provide showers with a touch of sulfur. Feeling fresh as a three-egg omelet, we caught a morning flight for Ísafjördur, a small fishing village in the northwestern part of the island.
Downhill skiing began in Ísafjördur around 1960 with a homemade tow pulled by an old Buick motor with three gears.
“It wasn’t much of a lift,” explained one of the lift attendants, “but that sucker could give you quite a ride when you threw her into third.”
Since those days, the old Buick has been replaced by more modern machinery, and Ísafjördur now has three lifts, 3500 residents, and no winter tourists. These figures give one a little insight into Icelandic skiing—it is a nonprofit organization…