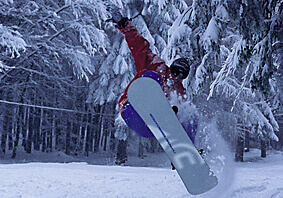 Just in case you happened to be curious…yes, one can ski in the relatively horizontal country of Hungary. There are a few hills scattered here and there among the flatlands that make up most of the Magyar Republic. This, of course, is information that is not particularly relevant to anyone less than a full-blown skiaholic—an addict who often wakes up in a cold sweat from a nightmare of being stranded somewhere where a ski slope is not within close reach.
Just such a fanatic might not even dare to venture to such a beautiful land as Hungary for fear of going through traumatic withdrawal symptoms. In an attempt to guarantee the peace of mind of such diehard skiers, I recently took on the task of investigating the skiing possibilities here.
Very few people can lay claim to having put the first tracks of the season on the slope of Galyatetö, Hungary—because the lift there has not been in existence for very many years. I had that opportunity since my visit preceded the annual opening of the ski lift. I might add that not only did I make the first tracks of the season on this approximately 150-
vertical-meter “monolith”, but all 75 turns (I counted them, of course) were in 50 centimeters of powder!
Hungarian powder, of course, is not the equivalent of Utah powder; but then again, Hungary is not famous for its powder, but for its goulash. This is not to say that the powder was like goulash—it was much tastier!
Following my perfect season-opening run, I celebrated with a beer at the Grand Hotel, situated near the top of the lift, and decided that my mission was not yet complete. I could not just write a self-indulgent piece about my achievement, without turning it into a more fully researched and relevant article for the benefit of skiaholics everywhere.
While sipping my beer, I pored over a map of Hungary, locating her highest peak, Mt. Kékes, a 1015-meter monster only a short drive away. I deemed that a personal account of the ski possibilities there would certainly enhance the usefulness of this report…