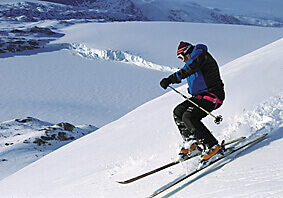 FAR FROM THE MADDING CROWD

Do the crowded streets, packed subways and grocery store queues of the big city get on your nerves after a while? Do you sometimes long for the wide, open spaces where you have a bit of elbowroom? Welcome to Greenland. This is a country of 56,000 people sharing 2,175,600 square kilometers of land! That is a population density of almost 39 square kilometers per person. Greenland has a national park that is larger than any country in Europe, and the municipality of Ittoqqorttoormiit is larger than Great Britain.
Anyone who can vaguely understand a map can figure out that “Greenland” is a rather inappropriate name for the world’s largest island. It is the equivalent of attaching the nickname “Tiny” to Shaq O’Neal, or calling Attila the Hun “The Great Peacemaker”. The name, however, was no mistake—merely a marketing ploy concocted by the Viking Eric the Red to attract immigration to this mass of snow and ice which he discovered over a thousand years ago. Some people followed Eric, but eventually, the Nordic settlement mysteriously disappeared without a trace.
Nowadays, Eric would not need his false marketing to attract visitors. There are plenty of us for whom limitless untracked powder snow and a low population of skiers per square kilometer is a very attractive statistic.
Most ski centers in countries as remote as Greenland bear very little similarity to ski areas in the more populated parts of the planet. That is to say that one can hardly call these places “ski resorts”. There do exist some ski lifts sporadically placed around the country for the entertainment and use of the local population, but no tourist infrastructure is in place around the ski lifts. In addition, the hours of operation are generally based upon the leisure-time habits and customs of the local villagers.
Be that as it may, Greenland is a fabulous country in which to enjoy skiing, be it with the use of normal ski lifts, with the expensive aid of a helicopter or by the traditional means of skins and touring skis. Then, there are also special Greenland options of uphill transportation such as snowmobile or dogsled.
The Quassussuaq area near the Nuuk airport has two lifts, and the villages of Sisimiut, Tasiilaq, Maniitsoq, Narsaq, Ammassalik and Qasigiannguit all have a lift as well. The largest of these ski centers is the one near Nuuk, which has 300 vertical meters of skiing and a run that is a full kilometer…