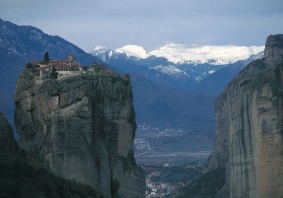 By the time Christer, Minna and I reached Arahova (940 m), the picturesque mountain village that services Mt. Parnassos, snow was falling heavily. The red tile roofs were turning white, and the locals were busily pulling their wares off the displays along the main street and back into their old stone houses. Arahova is the mountain equivalent of some of the lovely whitewashed villages of the Greek Isles. Here, among the narrow, hilly, cobblestone streets, young, colorfully clad skiers and snowboarders are juxtaposed with elderly Greek women in their traditional black garb.
The next morning, most of the 24-kilometer road that separated us from the skiing was covered in Bing Crosby’s favorite color, but this was Easter, for God’s sake. It was not Christmas, and we were in southern Greece! I kept our car in second gear and crept slowly upward. Snow-chains are not standard equipment in rental cars in Greece. At an elevation of 1750 meters, we pulled into the parking lot of the ski center, where the snow banks were about 2 meters high.
All our preconceptions about skiing in Greece were being shattered minute by minute. Apollo is the god of the sun, but he was definitely out to lunch. Snow was falling steadily and above us stood a massive mountain covered in pure virgin powder. The Mt. Parnassos ski area is made up of fourteen lifts spread out across a broad, treeless area between the elevations of 1600 and 2260 meters.
Much of the resort was closed due to the storm, but we found our way onto some short, steep slopes between rock cliffs on the lower section of mountain. As usual, when skiing in a country where the sport is not so developed, we had these powder slopes all to ourselves. About 15 centimeters of new snow covered the slopes—deep enough to throw up some spray and leave a nice track in the wake of each run…