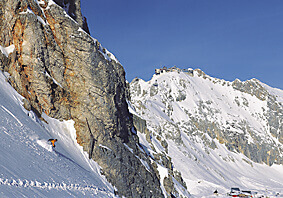 BERND RITSCHEL AND THE BAVARIAN ALPS

When skiers discuss the Alpine countries, they usually analyze and compare ski resorts in Switzerland, Austria, France and Italy. Some knowledgeable people might even mention Slovenia in passing, but Germany is often lost in the shuffle. Germany, which is normally too large and strong to be left out of any conversation on European
politics, economics or the like, has a very important position in the ski world as well. Somewhere in the neighborhood of twelve million Germans are full- or part-time skiers, and that has a major impact on the entire ski world, especially in the German-speaking countries.
Hundreds of small ski areas can be found all over the German countryside. All the best areas are in Germany’s Alps, but ski resorts also exist in the Bayerische Wald, the Schwarzwald and various other sections of the country.
The non-Alpine ski areas of Germany all suffer from low elevation and minimal vertical. Winterberg, near Kassel, is a good example. The resort has about 30 lifts, but the vertical drop is a meager 165 meters, and the lift system peaks at just a hair over 800 meters. This kind of ski resort is not going to attract a wide range of clients from the international ski set.
On the other hand, a number of the German resorts do have a lot to offer. The infrastructure is usually very efficient in German ski areas, and many of the villages are even more quaint and picturesque than their counterparts in Austria, if that is possible. Among the better resorts are Reit im Winkl, Berchtesgaden, Bayrischzell, Oberstdorf, Lenggries and Feldberg.
These villages, all situated along Germany’s southern flank, each boast more than twenty ski lifts and over 500 vertical meters of skiing. The one negative aspect of these ski areas is that they are still relatively low in comparison with most of the world’s ski resorts. Oberstdorf’s lifts rise to a respectable 2200 meters, but the other areas are almost entirely below the tree line.
One ski area in Germany is, without doubt, the crème de la crème—Garmisch-Partenkirchen. Hitler’s pride and joy when it was the host of the 1936 Winter Olympic Games, Garmisch today has close to 40 lifts transporting skiers around on Germany’s highest peak, the Zugspitze. Not only can you ski 1350 vertical meters on the slopes of Garmisch, most of the skiing is above the tree line, as the ski lifts rise up to 2830 meters. The open bowls and faces of the Zugspitze make Garmisch a favorite among freeriders…