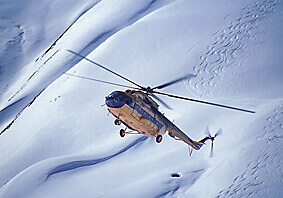 GEORGIA ON MY MIND

”Well the Ukraine girls really knock me out, they leave the West behind, and Moscow girls make me sing and shout, that Georgia’s always on my mi-mi-mi-mi-mind.” So sang John Lennon back in 1968, and these were about the first positive words out of the West to be said about the Soviet Union since another Lenin initiated the whole proletariat movement in Mother Russia.
Since the breakup of the Soviet Union, however, the changes have been coming fast and furious in the last great colonial empire. One of those changes has been the development of a top heliski destination and four-star hotel in the heart of the Caucasus Mountains of Georgia. With the advent of Glasnost at the beginning of the ’90s, the government of Georgia immediately traded its copy of the Communist Manifesto for a few back issues of Powder Magazine, and simultaneously figured out what to do with some of its unemployed helicopter pilots recently returned from Afghanistan.
In the heart of this 1200-kilometer-long range of snow-covered mountains, which stretches from the Black Sea to the Caspian Sea, lies the small ski resort of Gudauri. In 1987, Gudauri consisted of three antiquated lifts and a village that resembled a half-built shantytown. But since then, Western money and the state of Georgia have jointly transformed Gudauri with the addition of four Dopplmayer lifts, a 200-bed hotel and a small fleet of Aeroflot helicopters. The village itself still looks like something scourged by the Nazis in World War II, but the Austrian-built hotel, 4 kilometers away, is regal enough for a czar to set up court.
The hotel offers every convenience, including tennis courts, billiard tables, bowling alleys, a video room, swimming pool, sauna, fitness room, Jacuzzi, and massage room, as well as two restaurants and two bars. With all its amenities, it is the height of Western decadence and certainly has comrades Stalin, Trotsky, and company doing convulsive pirouettes in their graves…