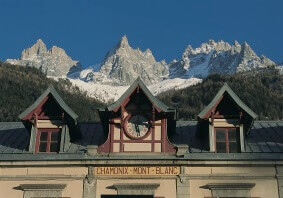 “THE TIMES THEY ARE A’CHANGIN’”

Many people consider France to be the land with the best skiing in the world. Whether this is true or not, it is certainly among the top countries to visit f
or snowsports. With over 300 ski resorts, a skier could certainly spend a few winter seasons in France skiing new runs every day, and he would still need the rest of the decade to explore all the off-piste territory.
That being the case, France becomes an extremely difficult country from which to choose a mere handful of ski areas representative of what this nation has to offer to a skier. Over a score of France’s ski areas are in the Pyrénées, including major resorts like Les Angles, Peyragudes, and Piau Engaly, all of which have at least 750 vertical meters of skiing. Nevertheless, France’s top stations de ski are clearly in the Alps.
France is the home of the world’s largest lift-accessed vertical drop and longest run—the Vallée Blanche in Chamonix. In addition to that, Les Trois Vallées, Paradiski (made up of La Plagne and Les Arcs) and the Portes du Soleil, which lies in both France and Switzerland, are the three largest lift-linked ski regions in the world.
France has thrice hosted the Winter Olympic Games. The first-ever Winter Games were held in Chamonix in 1924, while the 1968 Games took place in Grenoble and the 1992 Olympics were centered in Albertville.
Chamonix, situated in the Haute-Savoie region, is to France what St. Anton is to Austria. It is one of the world’s foremost mountaineering centers and the home of Mont Blanc, the highest mountain in the Alps. Its status is legendary, and despite the thousands of ski resorts which have been conceived and created since Chamonix’s days as a pioneer ski village, it still ranks as one of the most visited, most beautiful and most interesting ski areas in the world.
Also in the Haute-Savoie is part of the Portes du Soleil, made up of such villages as Avoriaz, Morzine and Les Gets, offering 650 kilometers of pistes in conjunction with a number of Swiss villages.
Moving south from the Haute-Savoie, one comes to the Savoie region and Albertville, a town used as a base for the Winter Olympics, whose skiing events took place in various ski resorts in the neighborhood. Near Albertville are some of the superlatives of French skiing, including Tignes–Val d’Isère, Les Trois Vallées, La Plagne and Les Arcs…