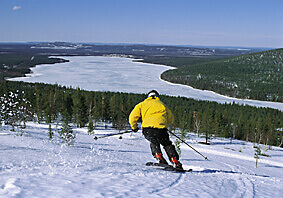 As one moves further east in the Nordic countries, the terrain gets decidedly more horizontal, and the landscape of Finland is more appropriate for cross-country skiing than alpine skiing. Nevertheless, there are a few ski resorts that can still keep an alpine skier in shape. The top resorts in Finland include Ruka, Levi, Pallas, Pyhä and Ylläs, of which Ruka is the most popular, and Levi has the largest number of ski lifts. Ylläs, however, has the greatest vertical with a full 463 meters of skiing, and Pyhä attracts the best skiers because of its somewhat more difficult terrain.
I flew from Helsinki to Rovaniemi, on the Arctic Circle, for a few days of skiing in Finnish Lapland. This was my first visit to ski in Lapland, and I gazed out over kilometer upon kilometer of frozen lakes, forests and swampland—white on white as far as the eye could see. Every now and then a low mound would rise slightly above the pancake-flat landscape surrounding it. The Finns call them mountains, but they know that the two-billion-year-old protrusions of snow in Lapland are really nothing more than hills.
The local people joke lovingly of “Finnish powder” as well, but they also are well aware that the winter winds that sweep at will over their treeless “mountain” tops usually compact the new fallen snow to the extent that it has a character all its own. The Finns have a character all their own too, and as I flew over this vast, desolate winter landscape, it was not difficult to understand the conditions that molded their character.
A rugged, hardy people, the Finns describe themselves as having sisu—a combination of guts and determination that gives them a gritty grin-and-bear-it outlook toward any inconvenience that Mother Nature or fate could throw in their path. Sisu seems to be an ever-present part of the Finnish psyche and has penetrated deep into the soul of Finnish skiers as well.
In the 1960s, Kalevi Häkkinen set a standard for sisu in the Finnish skiing world, when he set the world speed-skiing record, and ever since that day, Finnish skiers have had a passion for velocity. Häkkinen persevered with his speed skiing into his retirement years. In his mid-sixties, he still punched the clock at 200 kilometers per hour. During my stay in Finland, I found out that many of his countrymen…