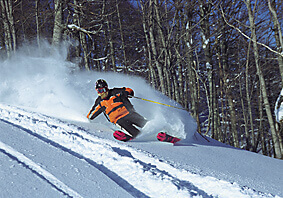 IN THE SKI TRACKS OF THE “CROATIAN SENSATION”

Croatia is famous for its long seacoast full of stunning beaches—a haven for sailors, swimmers and sunbathers during its long summer. Its Dalmatian coastline runs down the Adriatic Sea paralleling Italy’s shoreline on the opposite side. Other tourist attractions include the Old Towns of Dubrovnik and Split, picturesque and quaint historical cities, both of which have UNESCO World Heritage status.
Ski resorts and mountains, however, are two categories for which Croatia has no claim to fame. If it weren’t for the fact that Janica Kostelic, long known in ski racing circles as the “Croatian Sensation”, and her brother Ivica, two of the world’s top ski racers, both hail from this beach paradise, nobody would know that there was any skiing at all in Croatia.
There are, indeed, a few tiny ski areas in the country, including Platak and Sljeme, but the largest is Bjelolasica. Sure enough, both Janica and Ivica started their skiing careers on the humble slopes of this little resort.
At the base of Bjelolasica Mountain stands one lone hotel, and that sums up the housing facilities of what is known in Croatia as the Olympic Training Center.
Boasting a grand total of five lifts and 767 vertical meters of skiing, Bjelolasica is not going to make anyone forgot Val d’Isère, Innsbruck or any of the other locations that one usual equates with the words “Olympic Center”. On the other hand, since Janica became the first alpine skier to take four medals in a single Olympic Games (2002), an avalanche of aspiring racers may want to train in Bjelolasica in the near future.
Rafi, Jean Michel and I felt it would be an injustice to pass through Croatia without at least sampling what Bjelolasica had to offer. Shortly after our arrival, we mounted a slow-moving double chair lift that rose up the lower mountain. The lift carried us over a long, steep, mogul-covered piste that revealed numerous rocks and bare spots. At the top of the chair, four shorter lifts fanned out…