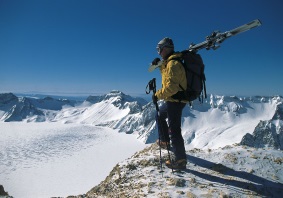 This tale begins in a travel agency in Beijing where I came across a spectacular photograph of a volcano with a huge lake at the bottom of the crater. Snow covered much of the landscape, but the lake in the photograph was an unfrozen blue. Then and there, I determined that I wanted to stand atop the rim of that crater someday with my skis on.
A series of questions to the travel-agency personnel and a fair amount of subsequent research produced the following results: Changbai Shan (2691 m),the volcano in the photo, is situated directly on the border between China and North Korea, and the Koreans consider it to be a holy mountain. There are actually sixteen peaks that surround the lake, the highest of which is Baitou Shan (2744 m). The name of the lake is Tian Chi (Heavenly Pool), and at 2189 meters, it is the highest crater lake in the world. The region is also the home of the Siberian tiger, a fact that might be of relevant interest to backcountry skiers.
My research piqued my interest even more. Now I needed somebody with whom to make such a trip, but that was a tough order to fill. Four years later, two half-demented Swiss comrades, Christoph Bichsel and Pascal Keller, were ready to travel to a remote corner of China based on vague and tentative hearsay to check out Changbai Shan and whatever else we could find out about Chinese skiing. In the meantime I had done a lot more research—enough to find out that skiing, which basically did not even exist in China in 1990, was now booming albeit on a very primitive level.
When Chairman Mao’s 40-year reign of power came to an end with his death in 1976, nobody in the world’s most heavily populated country would have had the money, let alone the time, for this relatively expensive leisure-time pursuit. Day-to-day survival was still pretty much a full-time activity for the Chinese. In addition, considering Mao’s rigid adherence to Communist dogma, skiing would certainly have fallen under the category of superfluous and decadent Western customs…