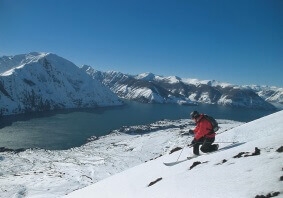 No country has been more meaningful to my many years as a ski journalist than Chile, for it was there that my career in ski writing and photography began back in 1985. I had planned an adventure trip to ski in Chile, and I came upon a ski-bum scheme to help me save money on lift tickets. A friend of a friend of mine, who happened to be the editor of the Finnish ski magazine, Skimbaaja, helped me realize my sneaky plan. Ari Heinilä wrote a to-whom-it-may-concern letter, introducing me as a ski journalist. I carried this document with me throughout my travels, hoping that it would be my passport to free skiing all around Chile.
In actual fact, I had never written an article about skiing or anything else, nor had I ever had any kind of photograph published, and I had no intention of doing any journalism. I was a poser—an impostor—an unscrupulous, conscienceless ski bum planning to scam the South Americans.
A funny thing happened. At a few of my stops, the local people were even more gullible or generous than I had ever expected. I not only scored free lift passes but the locals gave me complimentary hotel rooms and meals to boot. Confronted by this kindness, I found that I actually had a conscience after all, and I felt compelled to try to return the favor.
There was somewhat of a stumbling block to my new plan. I was traveling around with a hand-me-down, Russian-built Zorki 10 camera, not really the dream camera for a budding young photojournalist. It had a fixed 45-millimeter lens, I had never used it before, and I had also never used slide film in my life. Nevertheless, I decided that I did not want to be a cheat and a liar after all…