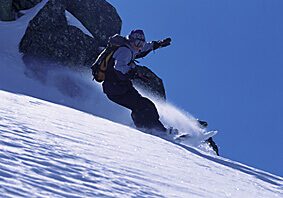 …AND NEVER THE TWAIN SHALL MEET

…Sofia is situated at the foot of Mt. Vitosha, a broad mountain made up of numerous sub-peaks and covering a full 278 square kilometers. This massif, which dominates the capital, played a prominent role in the Bulgarian plans when Sofia bid for the Olympics in the early ’90s.
The ski resort on Vitosha includes a long gondola that climbs 1100 vertical meters from Simeonovo, a village in the outskirts of town, to Aleko, the ski center (1810 m). From that point, a handful of chair lifts, platter-pulls and T-bars extend both above and below the gondola station.
Bulgaria uses the Cyrillic alphabet, so to begin with, signs are not of very much assistance to a foreigner. This fact was rather irrelevant, as the ski area did not provide any helpful signs anyway. Nowhere was it posted which lifts or runs were open or closed; piste markers were inadequate, and small trail maps were unavailable. Our confusion was multiplied exponentially by the fact that Vitosha is also guilty of the ultimate in mountain management incompetence—separate lift systems within the same ski area.
Christer and I began by purchasing a round-trip ticket on the gondola, a lift used basically for access. Ski lift tickets were not available there. Once we arrived at Aleko, the ski center, we skied down to the Romanski Chair Lift, where we bought a day pass and boarded the lift. We soon found ourselves inside a cloud, high above the tree line.
We skied by radar, staying close to some poles, which appeared in the mist periodically but were nearly covered by the snowpack. It did not take long for us to lose sight of the piste markers, and the only thing left to guide us was a piste machine track that was 3 meters wide. The visibility was approximately 1.7 meters, so I could just manage to make out this track, if my knees were adequately bent.
When we had finally felt our way down below the tree line, a local skier was kind enough to guide us down to a decent run that was entirely below the fog. It proved to be the case, however, that the lift that serviced this run belonged to the Vitosha Lale lift system, a different enterprise, and we once again were forced to open our wallets…