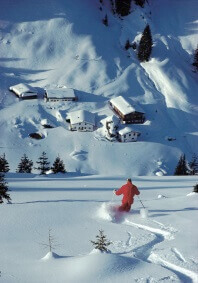 As I have Austrian roots, it is only natural that my discovery of the wonderful world of the Alps began in that quaint and cozy country. Debate will always exist as to which of the Alpine countries offers the best vacation opportunities. Some people prefer to visit destinations in the western Alps of France and Switzerland, where much of the skiing is above tree line. Here, the landscape consists of many large open bowls, chutes and slopes. Others prefer the tamer terrain prevalent in much of Austria, with its tree skiing, meadows and glens. Still others return with regularity to the stunning limestone monoliths of the Dolomites, whose beauty is hard to deny. Most people agree, however, that the ambiance and Gemütlichkeit in Austria are unparalleled.
Again, it is an almost impossible task to choose but a handful of ski resorts to represent this major ski country. With many hundreds of ski villages dotting the map of western and central Austria, only the flat provinces of Vienna and Burgenland got left behind as this small Alpine nation transposed itself from a provincial farming land into a ski industry giant over the last half-century. In fact, a tourist driving through Austria could easily get the impression that one could traverse most of the country merely transporting oneself with lifts and skis—and maybe one could.
Numerous ski regions not specifically dealt with in this chapter deserve an honorable mention. Kitzbühel was one of the first major ski resorts in Austria and still today is one of the country’s most popular destinations. The resort is also famous for the Hahnenkamm Downhill, one of the most difficult races on the circuit, held here every January. Although Kitzbühel is quite a bit lower than most ski resorts in the world, it boasts more than 60 lifts and its long tradition, historic town center and famous après-ski make it well worth a visit for skiers of all abilities.
Of the seven ski provinces in Austria, Tyrol stands head and shoulders above the rest. Historically speaking, our modern style of skiing all started in St. Anton and the Arlberg region of Tyrol, where Hannes Schneider developed the stem turn in the 1920s, pushing the Norwegian telemark technique into the background. This region has stayed at the forefront of Austrian skiing ever since, with the prestigious Dr. Stefan Kruckenhauser developing the Wedeln technique from his base at the Bundessportheim in St. Christoph. Later, in the ’60s and ’70s, local
St. Anton skier Karl Schranz became the marquee idol of the Austrian ski team for a generation. Today, nothing much has changed. The rugged mountains that flank the Arlberg Pass still make up one of the most visited ski areas…