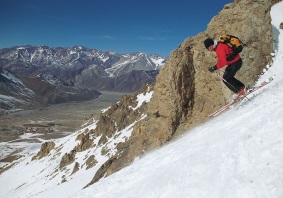 THE LORD GIVETH AND THE LORD TAKETH AWAY

I first discovered the joys and trials of Argentine skiing on an extended visit in 1985. An experience in the village of Rio Turbio characterized skiing on this continent at that time. Today, the ski area, situated a few kilometers from Rio Turbio, is called Valdelén, and it is still relatively obscure, even by South American standards. My short visit at this tiny ski area so long ago taught me that one does not need a lot of lifts or record-breaking vertical to enjoy a good day of skiing. In a way, that day was a kind of inspiration for this book, for it began a long sojourn in search of remote and little-known ski centers.
To begin with, making my way to Rio Turbio was not the easiest task I have ever undertaken. I had heard from vaguely reliable sources that there did exist a ski center in Rio Turbio, and I located the village on the map. It lies far into the southernmost regions of Patagonia, not far from the Straits of Magellan. This is about as remote as one can get in the ski world, short of a visit to Antarctica.
I flew to Punta Arenas, Chile, a somewhat redundant flight, since it took me 250 kilometers further south than my destination, but it was an easier connection than any that went through Argentina. From there, I backtracked 4 hours north by bus to Puerto Natales, a beautiful Chilean village of 18,000 inhabitants situated in the midst of the Patagonian fjord country.
The ski center is located exactly on the border between Chile and Argentina, officially in Argentina, 20 kilometers from Puerto Natales. Being so close to my destination, I decided to get a little information before embarking on the last leg of my journey. That was the South American version of…