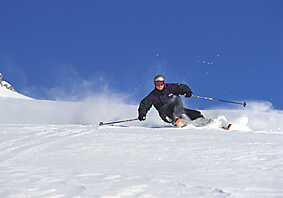 For those who have not yet solved the mystery, Minna and I were visiting Andorra, a tiny land of 464 square kilometers (about half the size of New York City) and 70,000 inhabitants, nestled into a little corner of the Pyrenees between Spain and France. Mountains cover every square centimeter of this minuscule princedom, and 60 of those peaks are over 2500 meters high.
According to legend, the country was founded by Charlemagne in the year 784, and since then, Andorrans have enjoyed living in peace and harmony, avoiding war for over 1200 years. Nowadays, Andorra is a modern and wealthy country, although the Andorrans did not confer the right to vote to women until 1970 and first created a constitution in 1993. (Draw your own conclusion on the relationship between 1200 years of peace and the late advent of women’s suffrage.)
For many years, tobacco was the main product of the country, and it was primarily smuggled out of Andorra and sold in France. Smuggling is actually legal here. Later, because of Andorra’s tax-free status, shopping gradually became the national sport, national flower and national anthem. Tourists began to flock here from all over Europe each year to partake in spree shopping for liquor, cigarettes, perfumes, optics, electronics and even cars. All the while, in the past few years, skiing has sneaked past shopping as the number one industry in Andorra, and that says a lot!
Snowsports can be enjoyed here from November into late April, and nowadays, Andorra attracts about nine million tourists annually, with many of those visitors coming for the skiing. Skiers can stay in the capital, Andorra la Vella, or in one of the small mountain villages, as everyplace is close to everyplace else…