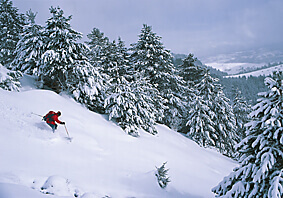 BACK TO THE ROOTS

This story began as far back as June 2000, when my cousin, Gina Schaar, decided to quit her high-paying position as a Washington, D.C. lawyer, and become part of a voluntary, non-profit, American-sponsored program to help the government of Albania democratize its judicial system.
Gina’s e-mails to her friends and family were brimming with interesting and amazing facts and anecdotes.
Gina also described a country full of beautiful scenery and lovely mountain ranges. As a skier, I was fascinated by the possibility of visiting Albania to practice my favorite pastime. Albania, however, was different from the other poor countries in which I had skied. Even the likes of Bolivia, Kyrgyzstan, Uzbekistan, India and Romania were the proud benefactors of some rudimentary form of ski lifts—not Albania. It had no time for such excesses under Hoxha’s rule, and this land, 70 percent of whose surface is covered by mountains, has not a single ski lift. My interest was piqued even more.
Gina began to investigate for me, but information did not come easily. Skiers were a little hard to come by, but Gina persevered. She met Helmut Obermoser, a transplanted Austrian who had been working in Albania for four years and knew the mountains of the country very well, at least in summer. She also found a couple of locals, Maqo and Mandi, two among very few Albanian ski enthusiasts.
She gathered information. Albania has many areas with snow-covered mountains. In the north, along the border with Serbia and Montenegro, are the spectacular Dinaric or Albanian Alps, a range of dramatic, cliff-laden, limestone peaks. Mt. Jezerca, at 2693 meters, is the highest mountain in this range. To the east, along the Macedonian border, lies the Korabi Range and Albania’s highest peak, Mt. Korabi (2751 m); and in the south, near Korca, are the Morava Mountains. The latter region had various places where one could ski, according to her local contacts.
This was enough information to set me into motion. Dutch adventurer Ronald Naar joined me, and we arrived in Albania’s capital, Tirana, in January.
To think that there are no “ski resorts” in Albania is wrong, but the Albanian ski locations were not what we in the West think of today as a ski resort. Rather, they are more like what existed in the Alps about 80 years ago—a village in the mountains where one can go skiing. After all, this is the way skiing began. We were going back to the roots—we just didn’t know quite how far back we were…