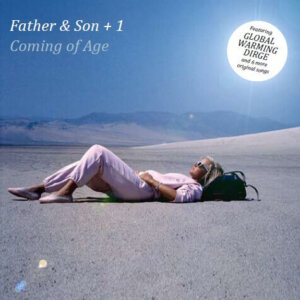 Coming of Age is the title of the first CD by Father & Son + 1, and this title has quite a lot of significance to the material presented. In one way or another, all the songs on the CD have to do with that critical period of a young person’s life when he or she “comes of age.”

The CD begins with a cover of Simon and Garfunkel’s classic, “The Boxer” (1968), the hard story of a poor boy leaving home at an early age and growing up in the harsh real world of New York.

But a teenager’s prurient interest in the sexy pair of legs in the desk in front of him cannot last forever—at least it cannot last in a vacuum. From the age of raw innocence reflected in “New Girl in Class”, the CD moves forward to Dylan’s anthem of the protest era, “The Times They Are a-Changin’” (1963). Now our teenager has definitely moved past the Chuck Berry period of school, cars, girls, and dancing, and has found something politically relevant to motivate him.

The maturation theme continues in the rock ’n’ roll tune, “La Dolce Vita” (1978), in which the protagonist continues to examine his values. He takes issue with following in his parents’ footsteps and rejects the materialism into which our society almost conspires to trap young people as they move in lockstep through the human assembly line known to us as the education system.

By the time our hero gets to the country song, “She’s Every Bit a Woman” (1984), he has really come of age. He has worked his way through the fits and starts of finding comfort with the 7th Avenue hookers in “The Boxer” and the youthful infatuation with pure sex appeal in “New Girl in Class”, and he has discovered true love.

Our hero meanders back and forth between the issues related to his entanglements and affairs with the opposite sex and with his continuing search for his true identity. In “American Dream” (1977), he seeks a set of worthy values to live by. This song takes our young person even further along the road to maturity, as he again questions the values of the society, including the heavy focus on money and fame and the escapism into drugs.

With “The Game of Love” (2000), we return to the realm of romance. Ahh, growing up is a long process, and this lightly cynical melody finds that true love is not always forever, and one very well might have to start the search for one’s soul mate all over again at some later time.

The next cut, “Teach Your Children” (1970), takes the story of coming of age to the next generation. Let us, if possible, use our maturation experience to soften the ride for our own offspring, and all the while, the positive aspects of their youth can help us parents get through one of the later stages of the same process.

The Global Warming Dirge (2007) is a kind of plea to the whole materialistic society to come of age—grow up and be responsible—give up your big gas-guzzling beasts of burden and do what is right for the environment and the Earth.

The lyrical content of John Fogerty’s “Rockin’ All Over the World” (1975) really does not have anything to do with coming of age. However, this song has a significant symbolic meaning for Father & Son + 1 with relation to our own maturation as a musical group. In July of 2008, it was decided that we would travel around the world together, beginning when Erik finished high school in June 2009. The plan was to sing our way through the world to support ourselves, so it was only natural that John Fogerty’s rock anthem was the perfect theme song for this world tour.

The final song of the CD, “Coming of Age” (1974) was titled “Talkin’ to My Friends” when the original version was written, way back when I was in one of the early stages of growing up. The song depicts a young man struggling with finding direction and meaning in life while trying to understand the world he has been born into. He must ultimately come to terms with who he is and what he wants out of life. In the end, however, he discovers that maturation is a lifelong journey. In the same way as we came of age when we passed from adolescence into adulthood, we later come of age as a parent, as a spouse, as a grandparent and various other roles along life’s road. Each new phase requires a reevaluation of who we are and who we want to be.